The City of Pismo Beach Administrative Services Department prepares an Annual Comprehensive Financial Report (ACFR), which is a complete set of financial statements in conformity with U.S. Generally Accepted Accounting Principals (GAAP).  These financial statements are audited each year by a firm of licensed certified public accountants.  The goal of the independent audit is to provide reasonable assurance that the financial statements of the City for the fiscal year are free of material misstatement.

The Certificate of Achievement for Excellence in Financial Reporting has been awarded to the City of Pismo Beach by the Government Finance Officers Association of the United States and Canada (GFOA) for its Annual Comprehensive Financial Report (ACFR) for fiscal years ending June 30, 2002 through June 30, 2021.  The Certificate of Achievement is the highest form of recognition in the area of governmental accounting and financial reporting, and its attainment represents a significant accomplishment by a government and its management.  An Award of Financial Reporting Achievement has been awarded to the Administrative Services Department designated by the government as primarily responsible for preparing the award winning ACFR.  It is the 20th year the City of Pismo Beach has received this award.

The ACFR has been judged by an impartial panel to meet the high standards of the program including demonstrating a constructive “spirit of full disclosure” to clearly communicate its financial story and motivate potential users and user groups to read the ACFR.  The GFOA is a nonprofit professional association serving approximately 17,500 government finance professionals with office in Chicago, Illinois, and Washington, D.C. 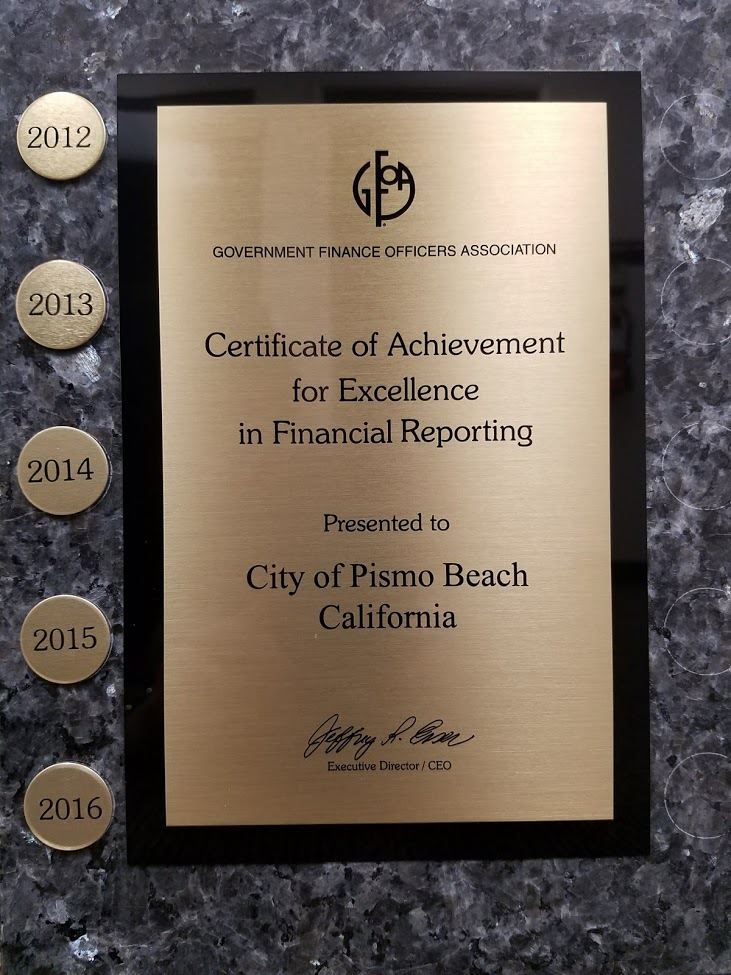