Local Coastal Programs (LCPs) are planning guides used by local governments for development within the Coastal Zone. They contain goals and policies for development and protection of coastal resources throughout coastal cities and counties in California. LCPs identify appropriate locations for various land uses based on their goal of environmental protection and sustainable development. Each LCP contains two components: a Land Use Plan (LUP) and an Implementation Plan (IP). Generally, the LUP contains the Coastal Element of the General Plan and provides the overall goals and policies that protect a City’s coastal resources. The IP is intended to implement the goals and policies in the City’s Land Use Plan and includes sections of the City’s Zoning Ordinance, and Specific Plans within the Coastal Zone. Although each LCP is unique to a coastal community, they all need to maintain statewide regulations through conformity with the Coastal Act requirements.

After the California Coastal Commission (CCC) has approved an LCP, the coastal permitting authority over most new development is transferred to the local government, but the CCC retains permanent coastal permit jurisdiction over all proposed development on public trust lands, tidelands, and submerged lands. The CCC will also review and approve any amendments to previously certified LCPs.

A Local Coastal Program acts as a General Plan for a local jurisdiction’s Coastal Zone, and the majority of the City is located within the coastal zone. As such, the General Plan and Local Coastal Program are essentially one and the same. Pismo Beach’s current GP/LCP was last updated in 1993 and the Coastal Implementation Plan (IP / Zoning Ordinance) was last updated in 1983. Although there have been minor amendments to each document in the interim, the age of each and inconsistencies between the two often create issues. Additionally, neither document adequately addresses new information and changed conditions. Additionally, the City also has a separate zoning ordinance for land outside the coastal zone. An important goal to updating the LCP is to obtain one certified IP/zoning ordinance. 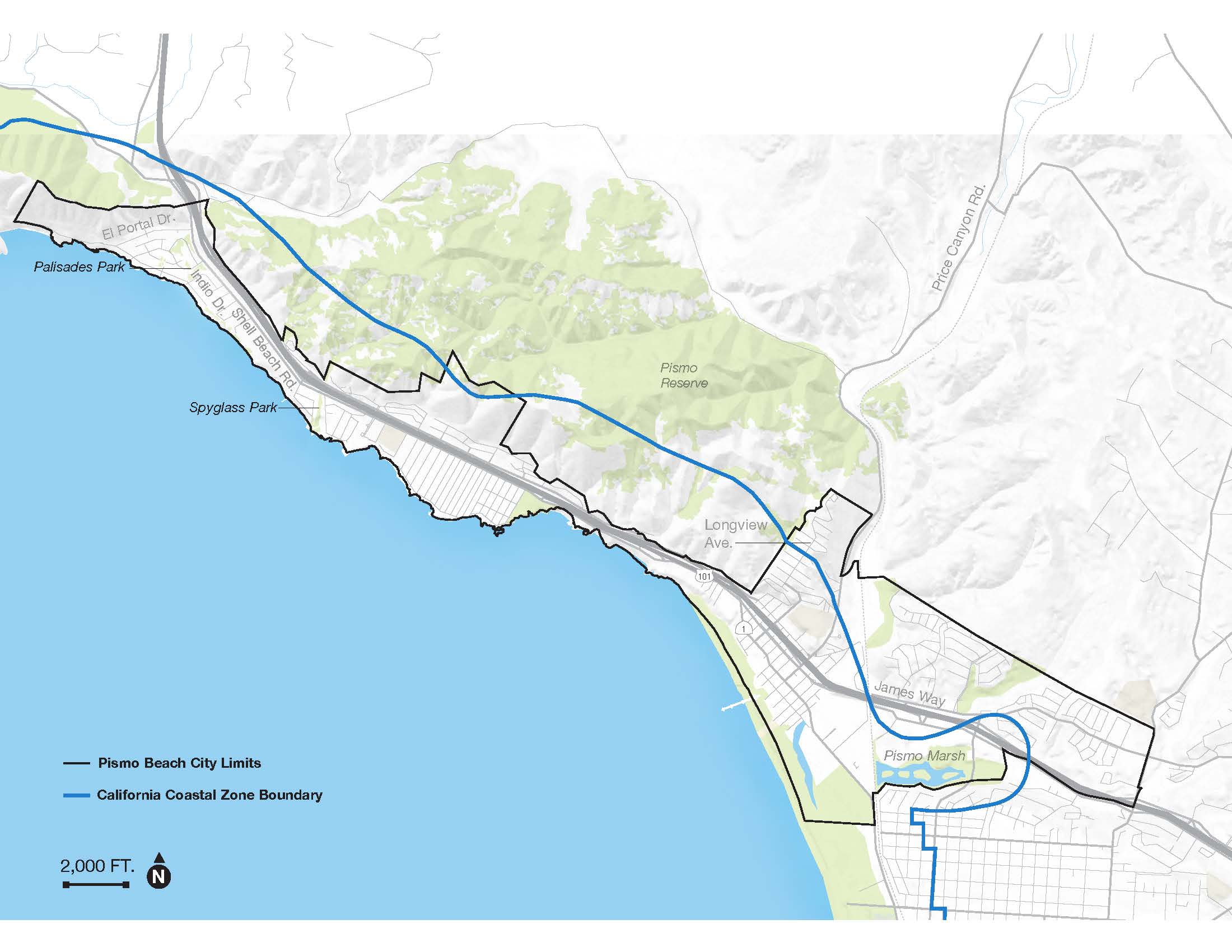 Established by voter initiative in 1972 (through Proposition 20), the California Coastal Commission (CCC) was made permanent by the Legislature through adoption of the California Coastal Act of 1976. The CCC is responsible for certifying LCPs and in partnership with coastal cities and counties, they plan and regulate the use of land and water in the coastal zone.

Chapter three of the Coastal Act consists of a policy and a guide that discusses the ten key issues that must be addressed in each LCP. These are:

•   Energy, Industrial and Other Coastal Development

According to the Coastal Commission, an LCP shall consist of “a local government's land use plans, zoning ordinances, zoning district maps and implementing actions which, when taken together, meet the requirements of, and implement the provisions and policies of the Coastal Act at a local level”. These components make up the Land Use Plan and Implementation Plan of the LCP.

With support from the California Coastal Commission Local Coastal Program Grant Project, the City of Pismo Beach obtained a grant to assist in the preparation of a Sea Level Rise Vulnerability Assessment and Draft Adaptation Plan, which are two critical components to the comprehensive preparation of the Pismo LCP.